The Kartell Louis Ghost chair was introduced in 2002 when Kartell and Philippe Starck began their relationship.

Kartell started out in 1940’s Italy, when the company founder Guilio Castelli – a chemical engineer – decided to start manufacturing plastic car accessories. Later, it became his mission to create plastic lab equipment to replace the glass instruments being used at the time, and to create household goods using plastic. The company became synonymous with innovation, winning numerous awards throughout its 60 year history.

Today, Kartell Italy utilises a team of internationally acclaimed designers to produce accessible, unique designer household goods and furnishings coveted by people the world over. One of those designers is Philippe Starck.

Starck was born in Paris in 1949 and went on to study at the Ecole Nissim de Camondo in France. At the tender age of 19yrs he founded a design firm, and like Kartell he became known for innovative design yet remained accessible to the mass audience.

The Louis Ghost is a contemporary chair with references to 18th century France. 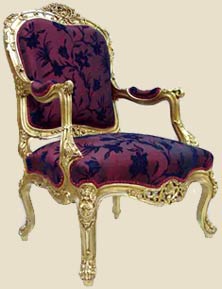 Also known as Rococo or Baroque, the french furniture style known as Louis XV, flourished during his reign of France from 1730 – 1775. The term ‘rococo’ means rock and shell – both of which were popular motifs during the time. Designs in this style are made almost entirely of curves with a romantic and sensuous look and feel. These key elements have been translated into modern chairs combining an old design with new materials.

Translated into solid glossy and transparent colours the Louis XV ‘rococo’ design is clearly displayed in the Louis Starck chair.

It’s available in 8 different colours, 6 of which are transparent and 2 solid colours. The shell-like seat back offers lots of support making it a surprisingly comfortable chair. Although lightweight and made of plastic, the Ghost Chair is exceptionally strong and resistant to knocks and scrapes. They can also be stacked up to 6 chairs high.

One Reply to “History”

We use cookies to ensure that we give you the best experience on our website. If you continue to use this site we will assume that you are happy with it.Ok